Laboratory of Brain Development and Repair

The Tessier-Lavigne laboratory investigates how neural circuits in the brain form during embryonic development. It also studies nerve cell responses to injury and the mechanisms underlying nerve cell death with the goal of developing therapies for brain injury and neurodegenerative disease.

Click on the thumbnails below to see enlarged pictures. 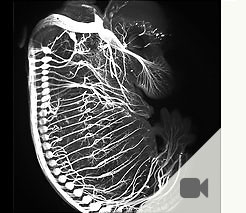 The human brain comprises several hundred billion nerve cells or neurons, which are connected in an intricate and precise pattern to form the neural circuits that underlie all brain functions, including perception, memory and the control of movement. These circuits form during embryonic development when each neuron sends out a slender extension, the axon, to connect to an appropriate set of target cells. The Tessier-Lavigne lab is interested in how these neuronal axons locate their targets and how inappropriate axon projections are refined or eliminated by selective axon pruning (or degeneration) during development. They also study how these pruning mechanisms may also mediate the degeneration of axons in neurodegenerative diseases including Alzheimer's and Parkinson's diseases or following trauma, such as in stroke or spinal cord injury.

In the embryonic brain, developing axons are tipped by a specialized sensory structure called the growth cone, which senses chemical guidance cues that instruct it to migrate in particular directions. The lab has discovered a number of the chemical cues operating in the mammalian nervous system, including small protein families known as netrins and slits, as well as receptors on the growth cones that detect many of these cues. To understand how guidance cues collaborate to ensure that the axons are guided unerringly, our lab is seeking to identify the full complement of cues guiding particular sets of axons, as well as the intracellular pathways they trigger to signal directed motion. As an axon progresses along its trajectory, its growth cone exhibits a remarkable plasticity, changing its response to guidance cues — losing responsiveness to those that directed it over the previous leg of its trajectory and acquiring responsiveness to those that will guide it over the next leg. A major focus in the lab is on understanding the mechanisms that control this plasticity and switching of growth cone responses, and their relation to other plastic changes, such as those occurring after injury and in learning and memory.

In the embryo, too many axonal connections are initially formed, and many axons have to be selectively eliminated through a process of pruning or developmental degeneration. The lab has shown that several of the cues that initially guide axons are later responsible for triggering axon degeneration in the embryo. The lab has also shown that some of the mechanisms that refine neuronal circuits during development are reutilized in pruning that occurs as part of adult plasticity, and share important mechanistic similarities with the neurodegeneration that occurs in diseases like Alzheimer's. To test the relevance of these mechanisms to human diseases, the lab has also begun using stem cell technology to reprogram nonneuronal cells obtained from patients with neurodegenerative diseases into neurons. This approach offers the opportunity to characterize the behavior of diseased human neurons and to examine the mechanisms that cause these diseased neurons and their processes to degenerate. Collectively, these studies have the potential to provide novel therapeutic entry points for treating these diseases.